Our streets are filled with people whose attention is on their mobile, not the road. So what can we do about it? 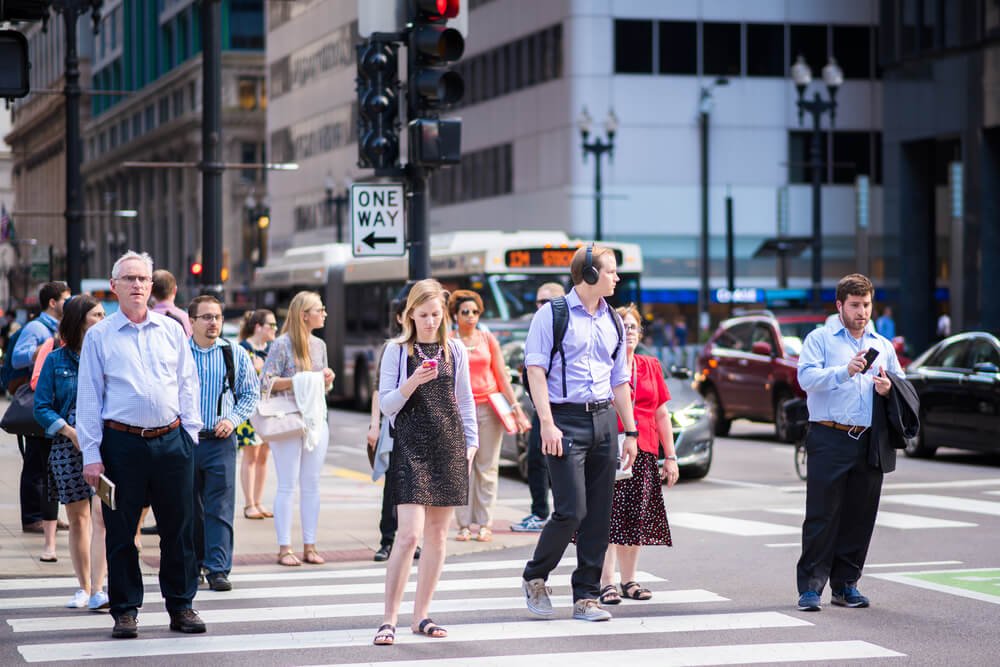 In Holland, some pedestrian crossings now have LED strips across the road which illuminate when it’s safe to cross. In China, there’s a city that has set up ‘texting lanes’, presumably next to the cycle path, the bus lane and the regular pedestrian path. Why? Because the world’s streets are filled with people whose eyes are pointing at their mobile screens, rather than the road, and an LED strip in the road is more likely to catch the corner of their eye than a green man will.

The people who hire our vans and cars cover a lot of miles. We haven’t done an official survey of this (perhaps we should) but we’d bet every single one of them has had to brake suddenly in the past year to account for a pedestrian who was looking at their phone as they stepped out into traffic.

Back in 2013, a World Health Organisation report identified pedestrian distraction, including mobile phone use, as a major factor in road traffic accidents. Smartphones have got a lot smarter and far more engrossing since 2013, so you can imagine that the likelihood of someone being hurt (or worse) only increases as each new generation of mobile introduces a whole new world of distractions.

Yet, aside from blindly hoping everyone will modify their behaviour, what can we do about it?

Speaking to the RAC, Shaun Helman, a chief transport scientist at the Transport Research Laboratory, believes the answer lies in placing road signs on pavements and kerbs, where pedestrians are increasingly likely to be looking.

It’s a curious quirk of the law that a driver of one of our hire vans who happens to use his/her phone whilst driving can be liable for 6 points on their licence and a £60 fine (which could go up to £1,000), when a pedestrian gets tailored street furniture.

Don’t get us wrong, we’re entirely in support of not using mobiles at the wheel, and we recognise that you’ll have the potential to do far more damage in a car or van whilst using your mobile than you will on foot. But a distracted pedestrian can still cause damage, and not only to themselves.

It seems an oddly unbalanced situation, especially when other parts of the world are trialling fines for pedestrians who cross roads whilst on their mobiles. Hawaii introduced them in 2017.

Perhaps the answer is a carrot and stick approach: floor level signage to reduce the number of accidents, and a fine system that applies to distracted drivers and pedestrians.

In the meantime, if you’re renting a car or van from us in the next few days, keep a lookout for the pedestrian busily checking the football scores and not focusing on the road. It might be me.