Meet the car so cluttered the driver couldn’t reach the handbrake to avoid a collision. 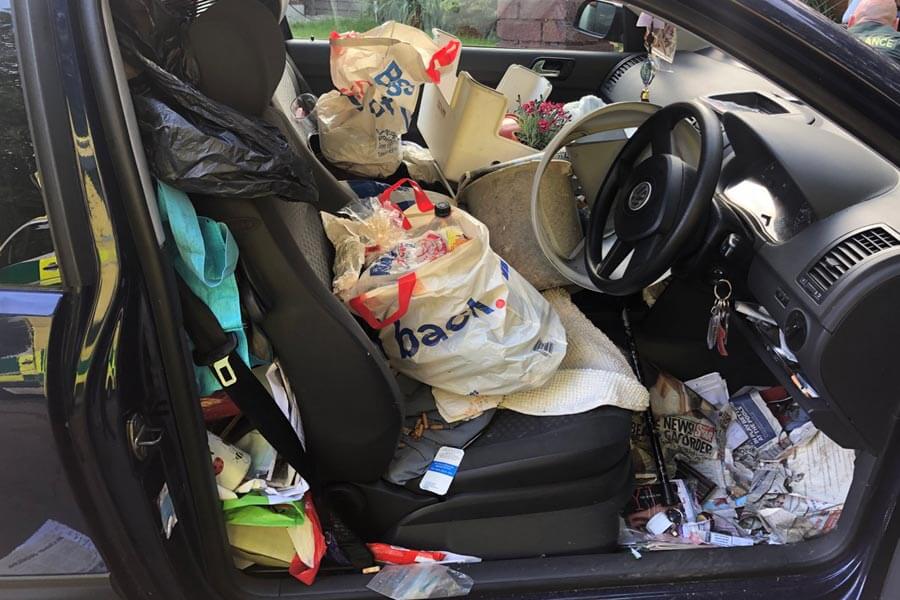 We always ask that our hire car and rental vans are returned to us in the state they were hired out but we understand that, after you’ve driven for miles, the vehicle may need a bit of a clean and tidy on its return to us.

But if you were to ask us, ‘how messy is too messy?’ we could show you this as an example of taking things way, way too far.

Boris Johnson’s car is a dream compared to this one! Driver couldn’t get the hand brake on and rolled back into a parked vehicle. I wonder why?🤔 pic.twitter.com/nhHrtpSErH

This image was taken by Hampshire police and posted on Twitter recently. It shows a car so cluttered that the pedals are almost covered, and the handbrake is buried beneath buckets, bags and plants. And yes, that does appear to be a BBQ griddle hovering dangerously over the passenger seat.

The car came to the police’s attention when it rolled back into a parked vehicle as a result of the driver being unable to reach the handbrake.

As Hants Police noted, “I wonder why?”. They also cheekily noted that “Boris Johnson’s car is a dream compared to this one!”

This may be extreme, but it does highlight the dangers of having too much clutter in a car, especially around essential controls, or rolling around on the floor where rubbish can become lodged under pedals and prevent you from hitting the brakes or depressing the clutch correctly.

So if, rather than making you shake your head in disbelief, this image makes you gulp and think it looks a little too similar to your own car for comfort, best give it a bit of a tidy!

Looking for a (clean and tidy) rental car or van? Get in touch to find our best prices now.